Comparing NBA teams from the past 20 years

With the NBA season fast-approaching (not fast enough for me), I wanted to play around with some NBA data and explore teams from recent history. My beloved Philadelphia 76ers have made a remarkable rise in the past two years, going from one of the worst teams in history to a contender for the conference championship, so there are some bragging rights invovled in this too.

The first step was to determine the best empirical measure of a team’s ability. The website Fivethirtyeight uses Elo for their ratings. They have an excellent primer on Elo and decisions they made in creating their NBA rankings as well. They also publish complete Elo ratings since the start of the NBA, but I wanted to create the ratings mayself (while using their ratings as a comparison benchmark).

Elo can be used in to look at trends over time to see how a team’s relative ability rises and falls. It can also be used for prediction: comparing the Elo rating of two teams gives you a probability of each team winning.

I built an application that lets you look at both of those things. On the first tab, you can track any team’s Elo over time using a specified date range. On the second tab, you can pick any two teams to see how they would match up on a given date in the last 20 years. It also shows the actual NBA games that took place on that date and whether the outcome was expected or an upset. You can view the standalone application here.


The rest of this post walks through the process of creating this application. Note that this code is for reference and won’t be reproducible as it’s written on this post. The full source code for the application is available here.

First we need to get the data. Basketball Reference is the go-to place for any NBA related data. It’s organized in a way that makes it possible to scrape the data.

I wrote a function to scrape this data. The website is organized by month and year. I wanted to go back about 20 years, but one thing that made this tricky a change in format after the 2000 season (BR added a ‘start time’ column). The function below parses the tables that include data, teams, and final score.

This gets the games for each month. Then we use the map function to get this for all of the months for the past 20 years and combine it into one table.

After some pre-processing of the data, we’re ready to calculate each team’s Elo. The elo package makes this fairly straightforward. The easiest way I’ve found to do this is to use two tables. The first table is games which contains each of the games and results; this is what we scraped from Basketball Reference. The second I called teams, which keeps a running tally of each team’s rating. After each game we append the updated score to the teams table.

We first calculate the Elo within each season. A few things to note here. Fivethirtyeight recommends a 100 point bonus to each home team. However, based on the data from the past 20 years, the home team wins 60% of the time on average. A 70 point difference translates to a 60% win probability, so each home team gets 35 Elo points and each away team gets the same penalty. The value of k represents how much a the Elo should move after each individual result. Setting this at 20 is fairly high, meaning that each result has the potential to move the Elo a lot.

Finally, we want an Elo for each date of the season (taking out the summer months), not just after games. This is what will allows us to do the hypothetical comparisons. The fill_elo function will give us that.

Then we run them all together get our complete Elo table which holds our running tally of rankings for hte past two years.

How does it compare? 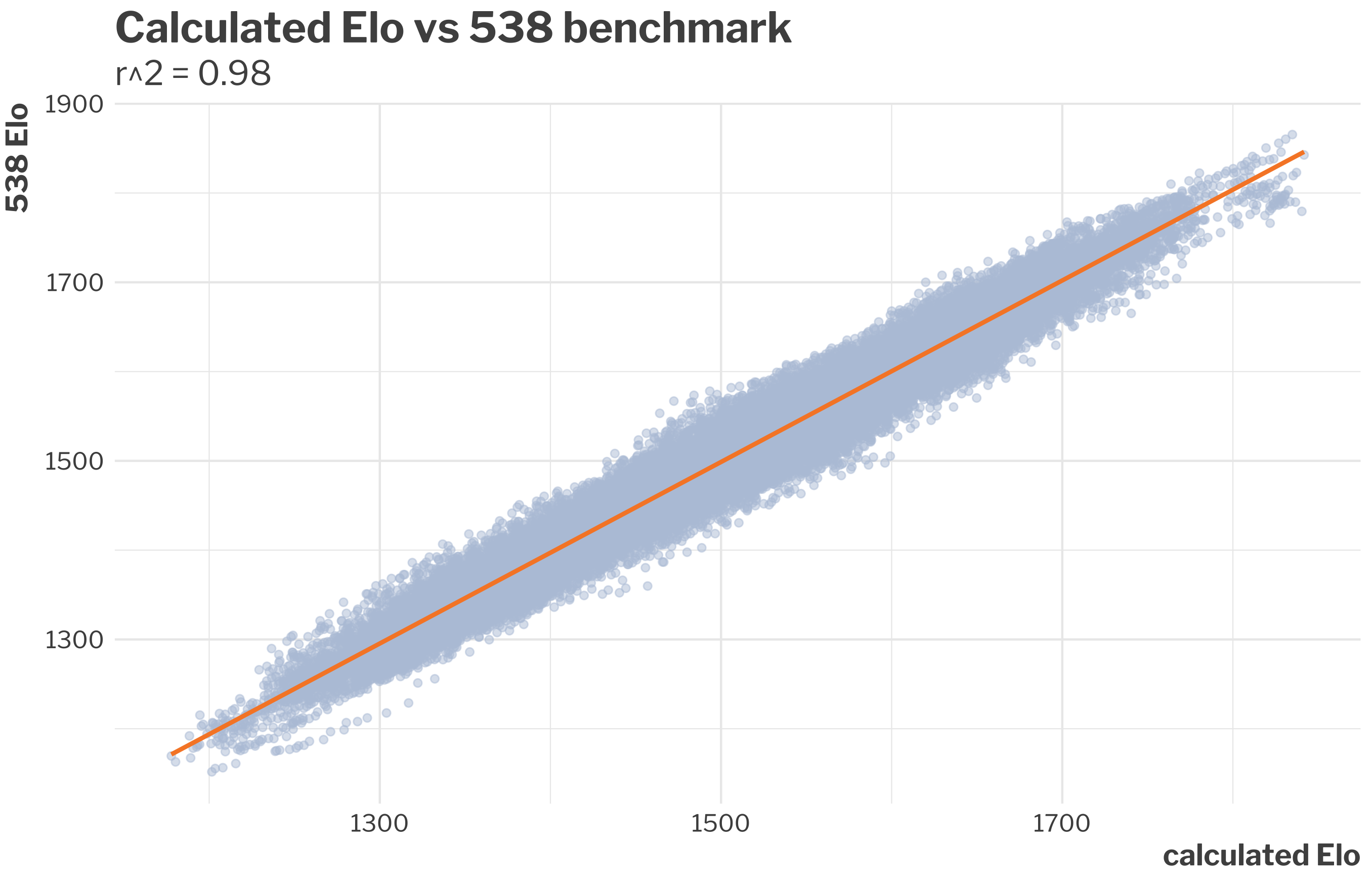 The image above shows the comparison my calculated Elo scores and the Fivethirthyeight scores as a benchmark. The r^2 is about .98 so it looks like I was able to match it farily closely. I used 1997 as my base year and eliminated that from most of my analyses; this gave my ratings some time to even out.

Updates to the application

While I’m pretty happy with how the application turned out, there’s still a few updates I’d like to make.

I welcome feeback on the applicaiton or data collection. Thoughts on things to add? Ways to improve the code or make it run faster? Feel free to leave them in the comments.