When does "garbage time" start?

The 76ers recent Christmas Day game against the Milwaukee Bucks got me thinking about garbage time. The Sixers held a fairly substantial lead for the whole game, but let it get close at the end (they were outscored by 15 points in the fourth quarter).

I started to wonder, “When does garbage time start”? According to Wikipedia:

Garbage time is a term used to refer to the period toward the end of a timed sports competition that has become a blowout when the outcome of the game has already been decided, and the coaches of one or both teams will decide to replace their best players with substitutes.

We’ll use the data from the full 2018-19 season. Let’s grab the play-by-play for the first game from that season.

Ah yes, I remember this game - Sixers lost to the Celtics.

The first question we’ll look is when does the coach decides to put in their substitutes, presumably because the outcome of the game has been decided and they want their less experienced players to get experience. To analyze this, we should take look at when a

Philadelphia played 11 unique players, while Boston played 13 (a team can have up to 14). For Philly, the 9 players played in the first half, but 10 and 11 came in in the last two minutes of the game. For Boston, 9 also played in the first half, one showed up on the 3rd quarter, and 3 came in right at the end. This represents one thing we have to deal with: each team has a different rotation depth, so one team’s garbage time team might start with their 11th player while another might start with their 14th.

Below is function that gets the time of first appearance for each player, the running total of unique players that each substitute represents, and the score margin when they checked in.

When applying that function to the first game, we can see that garbage time started when the 10th Philadelphia and 11th Boston player came in - about a minute and half left and Boston up by 16. Now that we know it works, we can apply to it each game of the season.

The chart below shows the first appearance of each player in the rotation, with the 4th quarter highlighted in red. 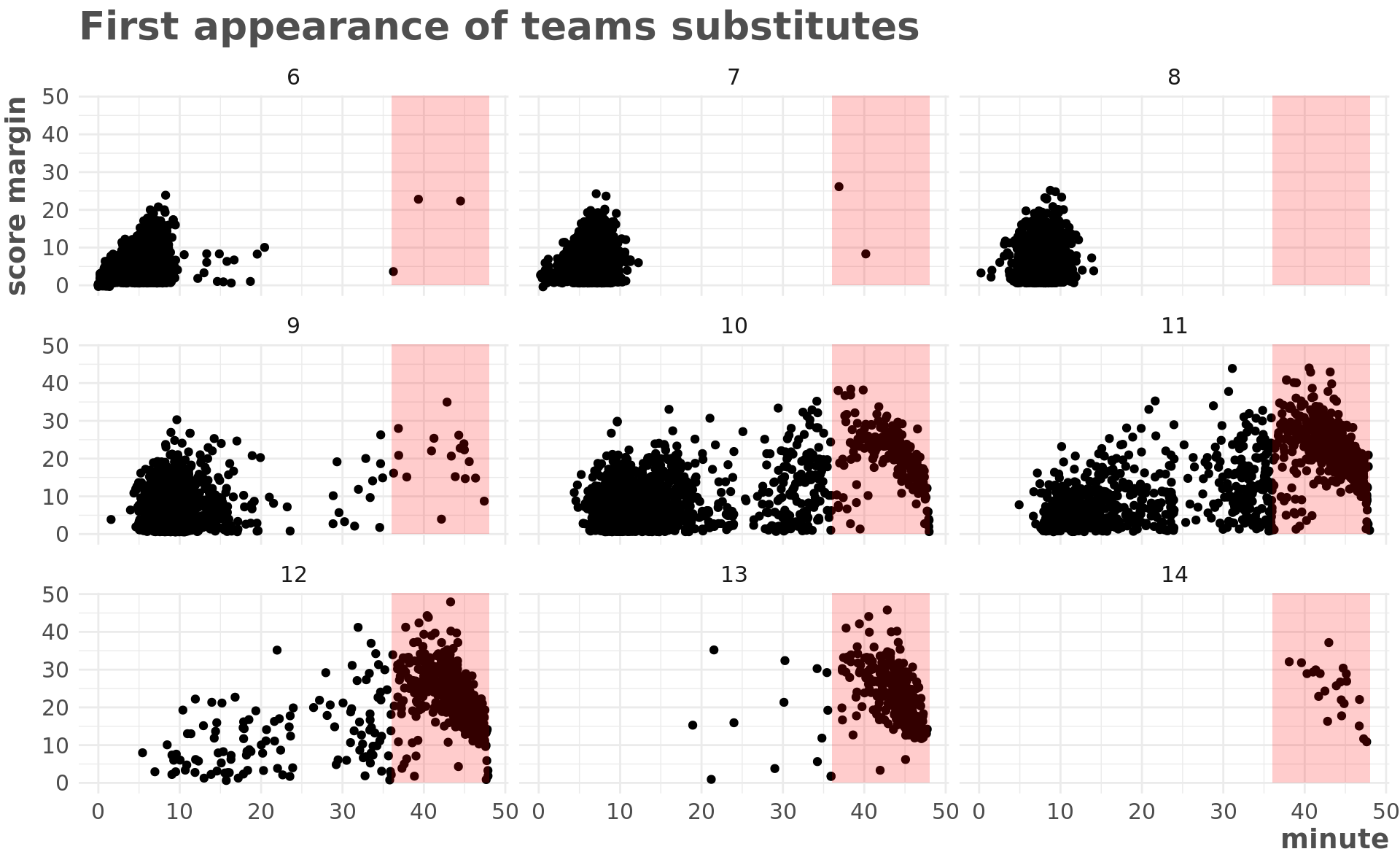 Based on this chart, I think we can be fairly safe if we say that garbage time starts when the 12th player enters in the 4th quarter.

Let’s apply that definition to all of the games to see when garbage time starts or what the final margin was if it didn’t happen.

Now we have play-by-play for each game and whether garbage time had kicked in.

How many games went to garbage time?

That sounds about right to me.

What is was the score margin and time when garbage time began? 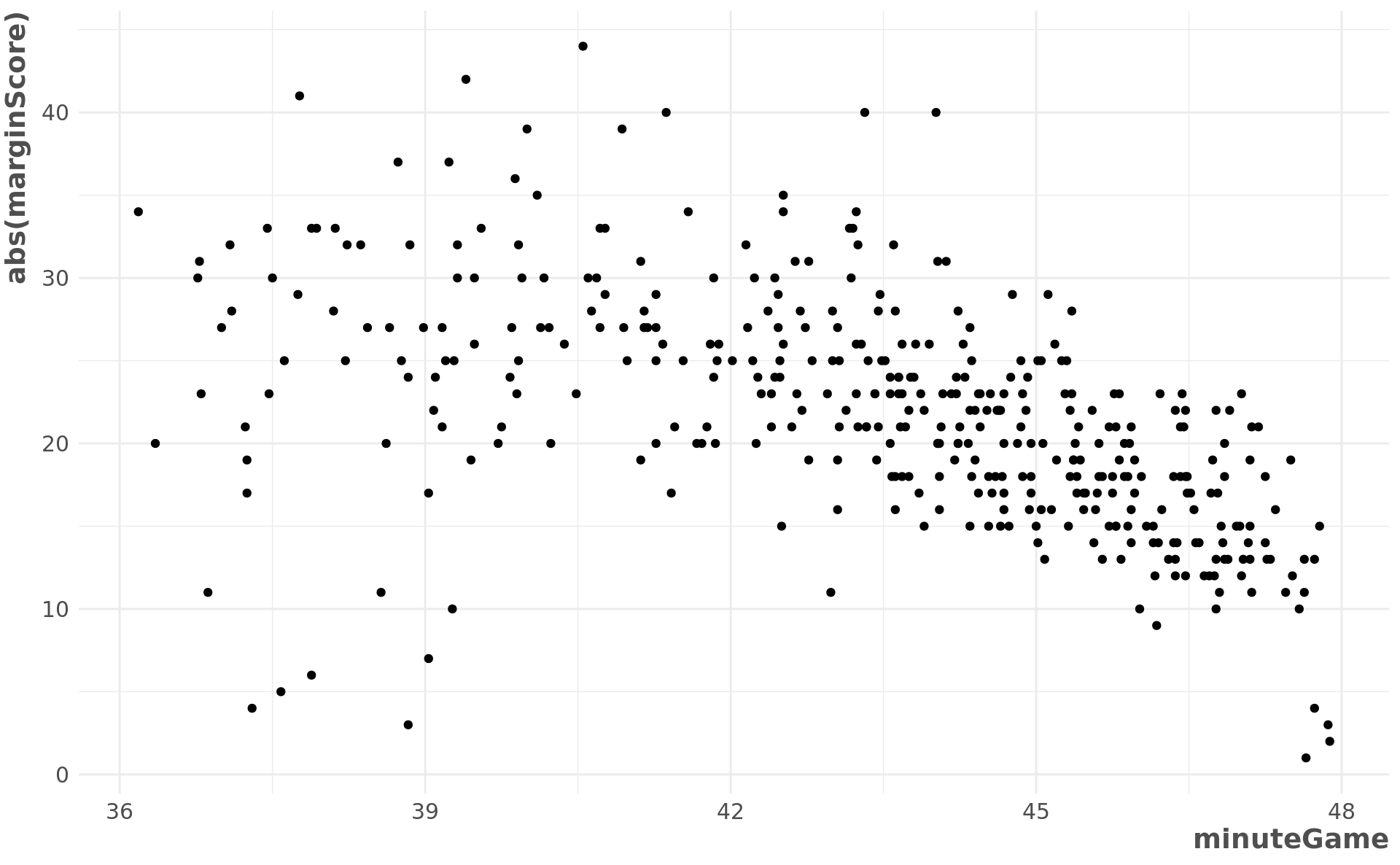 There’s a few different ways to define this problem that will influence our modeling choices moving forward.

The first two represent how coaches make the decision to put in their deepest bench players while the last question has to do with the probability of the outcome.

Here we’ll examine the relationship between score margin and game time. I use the rethinking package that provides an interface to Stan for estimating Bayesian posterior distributions. 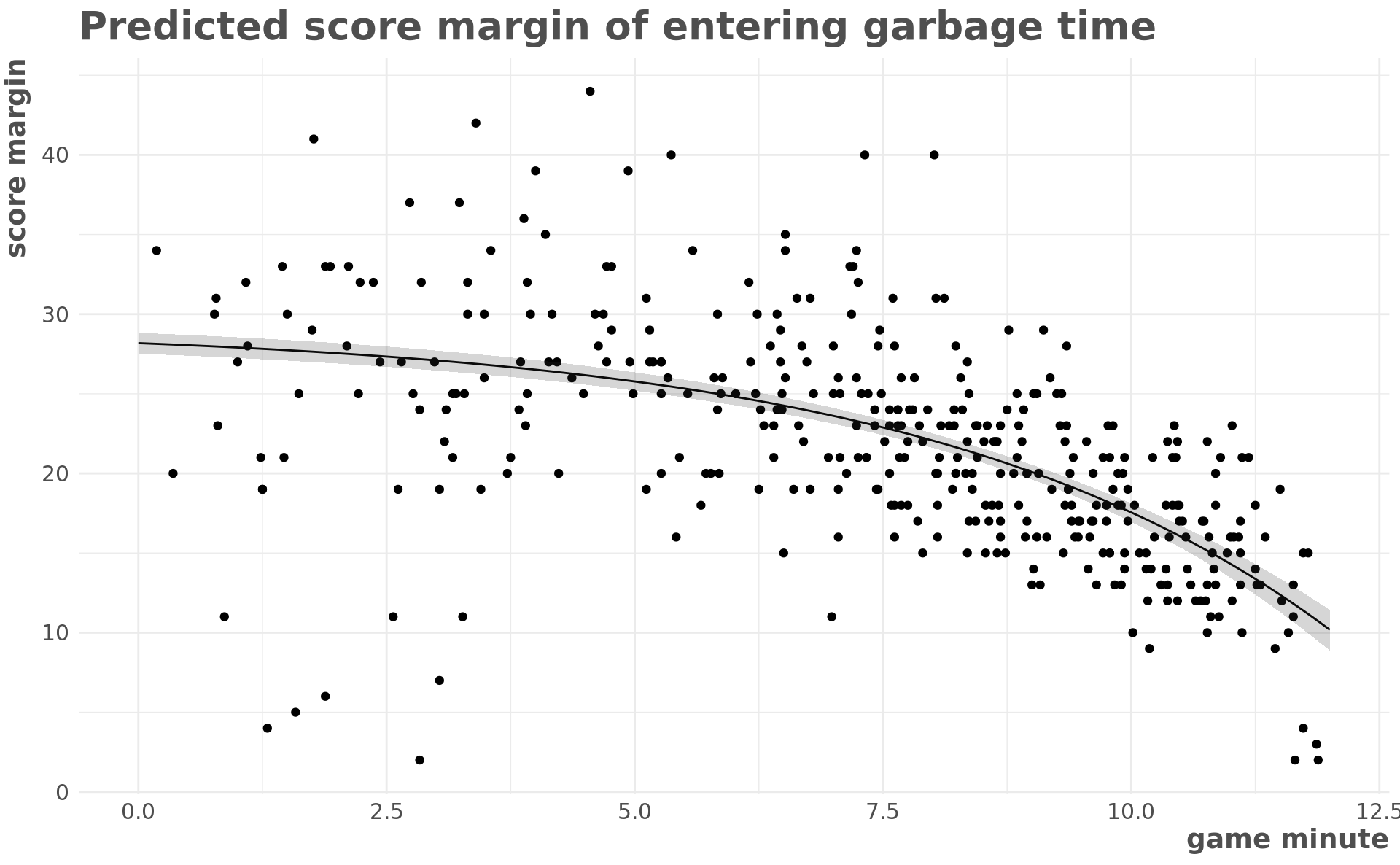 This model gives us the estimate of the score margin that we expect garbage time to kick in at each point in time. It seems to fit the data well, but it may not be the most informative way to formulate the question.

Survival analysis is fundamentally about time to event. Here we’ll use a Cox Proportional Hazard model which takes the probability of a team not entering garbage time a given point in time, and factors in a parameter for the score margin. 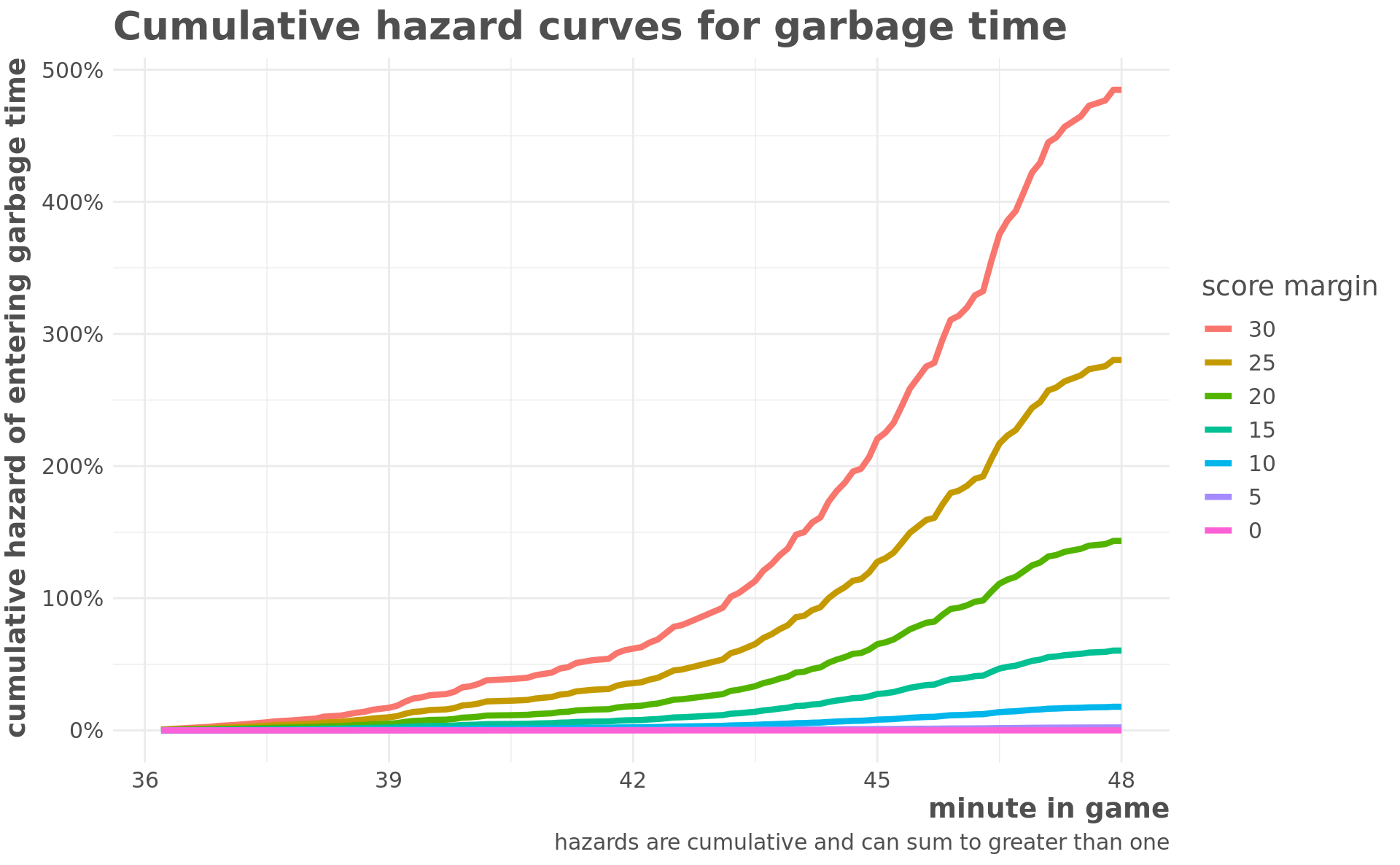 Since the hazards are cumulative, they can have a greater than 100% probability. One limitation of this model is that is that the score margins are based on an average, so it seems to be overestimating the probability of entering garbage time for low margin games. For example, a game that has a 10-point margin with 3 minutes to go would be considered a close scoring game, but this model estimates it has a 25% probability of entering garbage time.

When is a game decided?

The other way to look at garbage time is to examine at what point the outcome is already decided. Below I’ll fit a logistic regression that calculates the probability that the team ahead at a given point in time ends up winning. We’ll also factor in whether the team is home or away as home teams have a higher chance of winning the game from the start, all other things being equal. 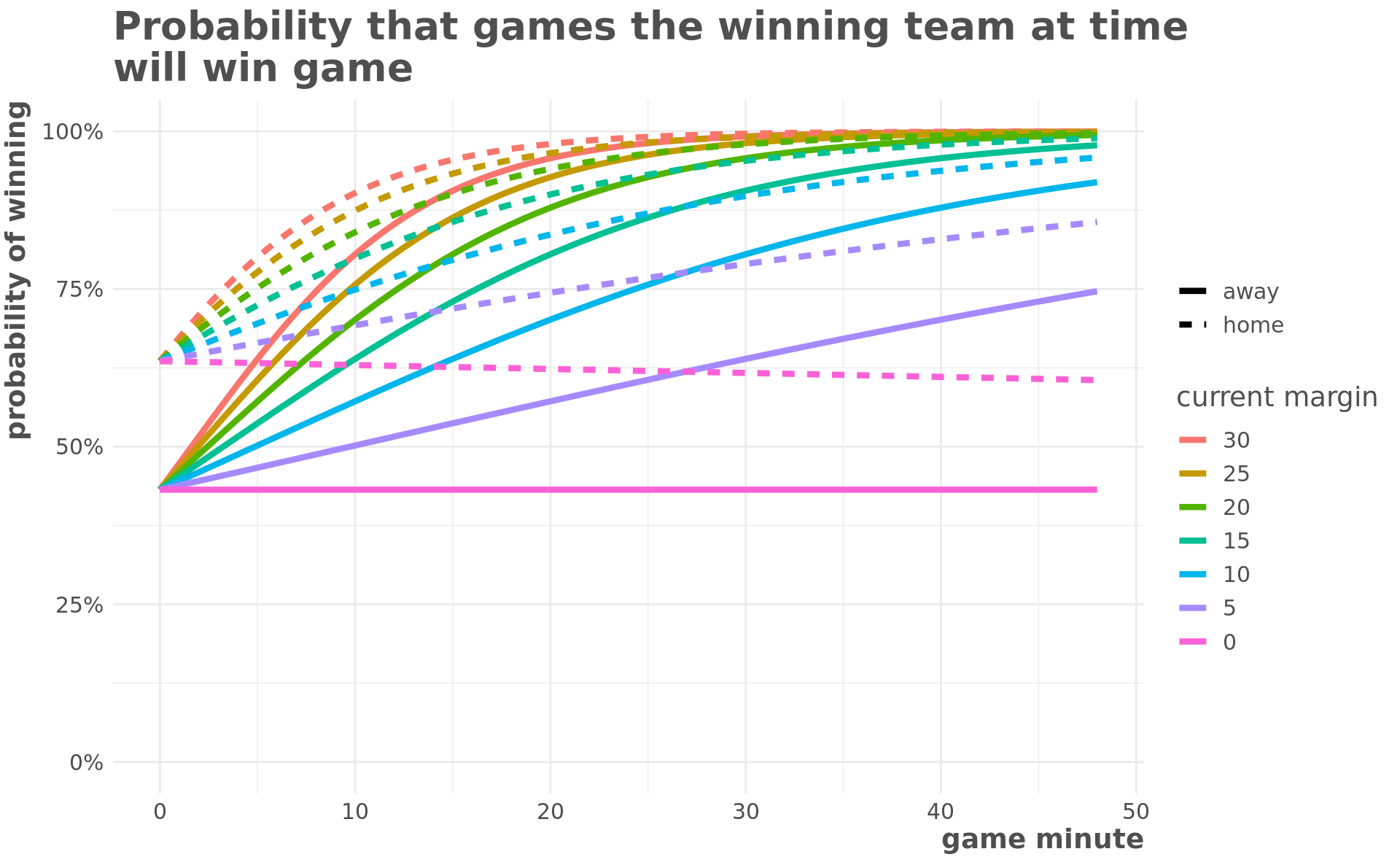 There are a few interesting things happening here. You can see the home team’s advantage diminishing over time. Games with a 30 point margin are basically decided at half time, and overcoming a 20 point deficit in the 4th quarter is quite rare.

However, there are a few limitations of this model. The home and away margin should converge at the end of regulation and all other margins should be at 1 at minute 48. These are limitations of how we defined our model. 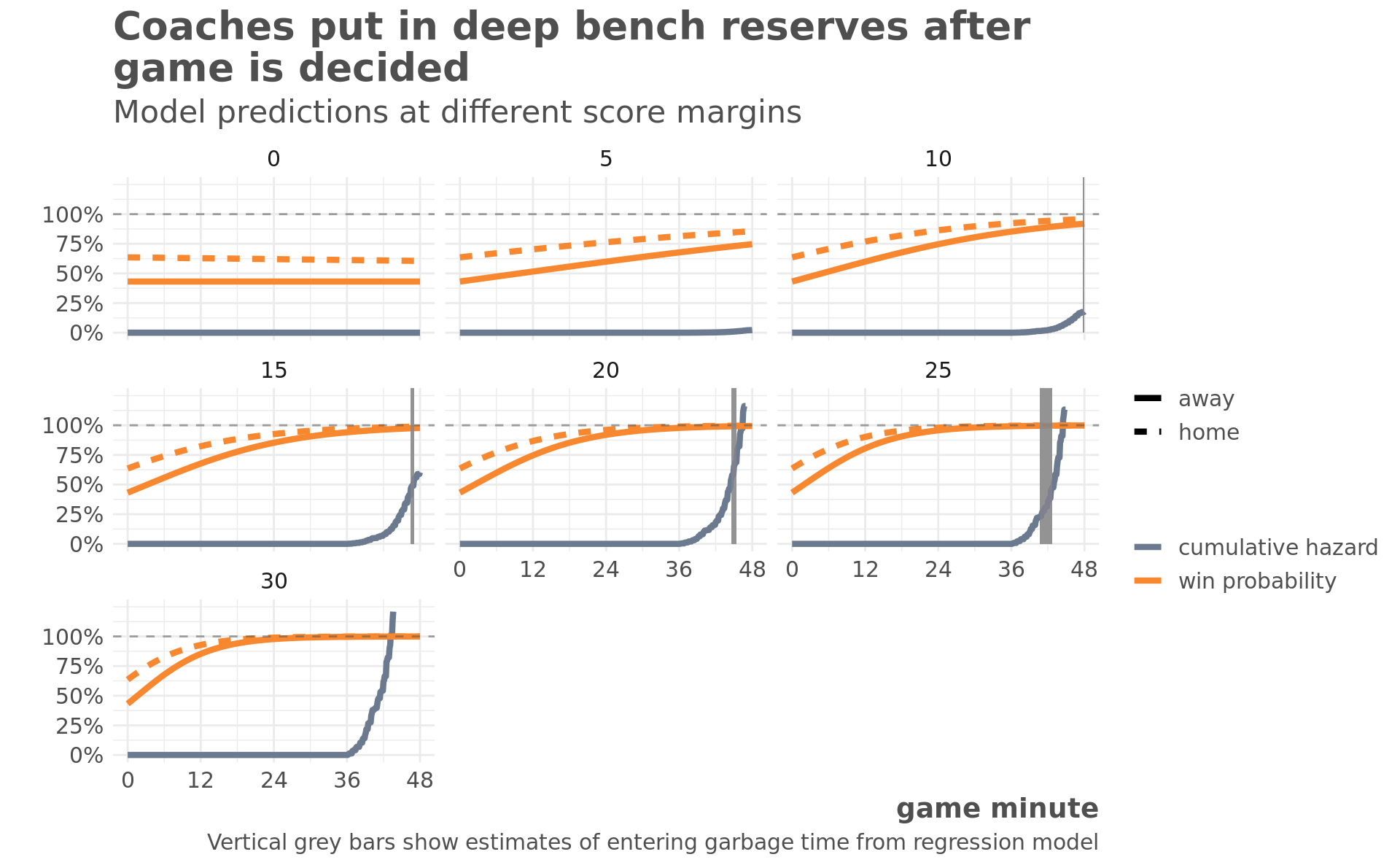 This chart is showing all three models together broken down by a range of margins. The blue lines show the cumulative hazard curves of survival model, the orange lines show the probability of winning at each point in the game for each margin, and the vertical grey bars show the estimate of the most likely time of entering garbage time1.

Unsurprisingly, coaches seem to have a very low risk tolerance to putting in their deep bench players when the game has been decided beyond any doubt.

There are a number of other questions that would be interesting to explore in this problem.

I set out here to examine the question of when garbage time does and should start. As I went along, I became interested in how the different problem definitions led to different modeling choices. Each of the different models we chose gives insight into the question we asked it; however, each also has tradeoffs. It’s important to understand how different framings of a similar questions lead to modeling decisions and therefore to insight we gain from an analysis.

What are other ways that we could address the question of when garbage time does and should start? How could we improve the models presented here. Feel free to share any feedback you have.